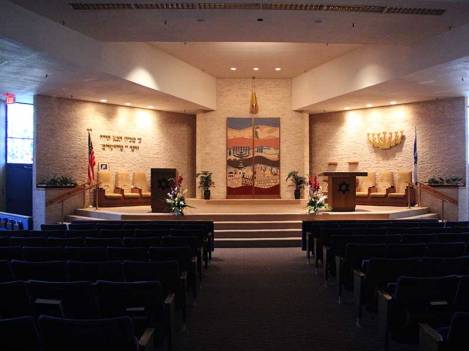 Shabbat Shalom! This phrase echoed through every voice Beth David Synagogue today. I unexpectedly ended up there. Originally, I had arranged to attend a service at Temple Emmanuel, a Reform Judaism synagogue. However, after arriving I learned that two of the rabbis were out sick and service had been cancelled. Luckily, I met a lady named Emily and her two sons who told me about Beth David, a Conservative Judaism synagogue. I drove behind her for only six minutes or so before we arrived. As I walked towards the prayer hall, Emily stopped me and pointed towards a bin with kippahs, those little Jewish hats I had seen before. She said that the men wear them as a sign of respect in the prayer hall. So, I took a grayish-blue kippah and placed it on my head and waited a moment to enter because you cannot enter the prayer hall while the Torah is being read. Since I had to drive from one synagogue to another, I was over an hour late as this service began at 9:30 opposed to the 10:30 start for the other synagogue.

Emily and her boys took a seat near the children’s section and I sat on the inner isle in the very last seat. I wanted a good view of everything. After only a few minutes, an older lady in front of me introduced herself as Anne and offered me her chumash, a large red book containing the Torah in Hebrew and English, as well as a commentary. Only a few minutes later and Anne moved to sit next to me. Apparently, students from UNC Greensboro often visited for World Religion courses. She filled me in on everything I had missed. The service starts with readings from their prayer book, the siddur. Then a group of men and women go up and read from Torah scroll at the bimah, a large, flat podium that held the Torah.

This was wear I had entered. I sat and listened to the group take turns reading. Well, actually, reading is not the word for it. They were chanting, almost singing, the words in a restricted melody and rhythm. All of it was in Hebrew. Thanks for my few months of Hebrew at a former school, I was able to find particular words and somewhat follow along in the chumash. Every time they stopped reading the Torah, there would cover it with a cloth – and this took place several times. Then the service went back to using the siddur and each of the chumash were collected and placed on a shelf. Prayers for the sick and remembrance of the dead were read and people came to the front who wished to participate. A young woman, possibly a teenager, came out and stood at a podium on the ground with her back facing the group. She led a series of readings and congregational responses in the same Hebrew chanting as the others. Then, the Torah was closed, covered, and marched around the room. The woman carried it in her arms and continued chanting. Everyone reached out and touched the Torah with either their hand, chumash, or tallit (a prayer shaw with fringed corners).

The Torah was returned to the platform and placed inside the Torah Ark, which lies behind the painted sliding doors in the center of this picture. The rabbi then stood up, not on the platform, but down on the floor. His short message was about change and what moves a person to continue on their journey when change must take place. The most interesting aspect of this part of the service is the amount of interaction the group had with the rabbi, offering responses and even courteous disagreements. Not everyone participated, in fact, there was a rather loud snoring coming from my left somewhere, but a large number of people did. As the service returned to the siddur, more prayers were offered and the children were brought in. They stood on the platform where the leaders had returned to and chanted the closing songs while the doors of the Ark were closed. The children were then seated while announcements were made. The service ended with many happy children receiving suckers and many happy faces repeating, “Shabbat Shalom.”